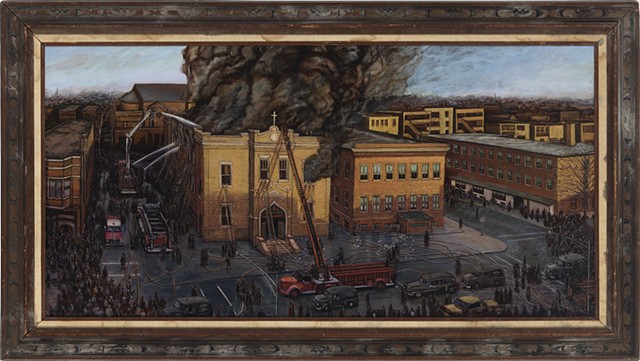 Our Children of Angels
Oil on Canvas
24x48
< previous next >

December 1, 1958. The schoolchildren of Our Lady Of Angels were almost ready to leave school for the day when they suddenly realized the hallways were filled with smoke. Many of the students and their teachers assumed that they were trapped and resorted to praying, some jumping from second story windows. As neighborhood parents ran to the scene with ladders too short to reach the windows, the fire department arrived in time to pull children from the engulfed second floor, but could not save 92 children and three nuns. The aftermath shattered the community with many children critically burned and emotionally damaged.

A subsequent investigation determined a student lit a fire in the basement stairwell.